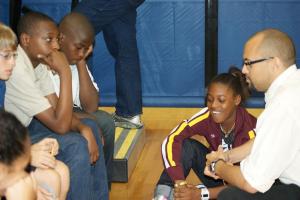 Working with students during my presentation

Today, I gave a presentation on nonviolent civic action to 300 8th graders at Alice Deal Middle School in Washington, DC.  I was invited by one of the school’s teachers, Terrence Ngwa, who was also a participant in my peace education class during the summer of 2009.  This was really fun experience, not only because I got to catch up with Terrence, but I also got to meet a lot of amazing students at Alice Deal and some other presenters doing excellent work in the fields of peace, conflict resolution, human rights, and diversity training.

After getting all their definitions up on paper, I strung them all together to outline a broader understanding of nonviolent conflict/civil resistance.  In short, when people’s basic human rights (freedom to assemble, freedom to practice religion, freedom of speech, etc.) are being abused or violated, a conflict (disagreement between two or more parties) can arise between those who are being abused and those are doing the abusing.  Not willing to accept such abuse, ordinary people can resist (fight back and challenge the status quo) by using nonviolent means such as strikes, boycotts, and mass demonstrations, in a way that taps into their own sources of power (their capacity to achieve a desired outcome).

After using their definitions to develop this broad understanding, we then watched a 20 minute segment from the documentary series, A Force More Powerful, looking at the sit-in campaigns in Nashville, TN during the civil rights movement.  The students were quite amazed at this moment in history and how young people were mobilized, trained, and in turn successful in using nonviolent action to resist segregation and racism.

This entry was posted in Presentations. Bookmark the permalink.