This Tuesday I teamed up with a friend and fellow peace educator, Tarek Maassrani, to co-facilitate a conflict resolution workshop for 45 crew leaders in the Washington DC Department of the Environment’s Green Zone Environmental Program (GZEP).  We were sub-contracted by the Student Conservation Association – an educational and environmental non-profit that works with youth across the country on conservation and trail building.  They also work with GZEP in coordinating a series of workshops on leadership, conflict resolution, trailbuilding, and teamwork to orient GZEP crew leaders and prepare them for the program.   Learn more about what we covered in the workshop.

Participants were broken up into groups of three, given a handful of index cards and asked to write down words or phrases that come to mind when they think of the word, “conflict.”  Member from each group then came up and placed those index cards on a giant xy axis (x axis had “action words” on one end and “feeling words” on the other.  The y axis had “positive words” on the top and “negative words” on the bottom). After all cards have been placed on the chart the entire group takes a minute to notice any trends in how the group as a whole views or understands conflict. 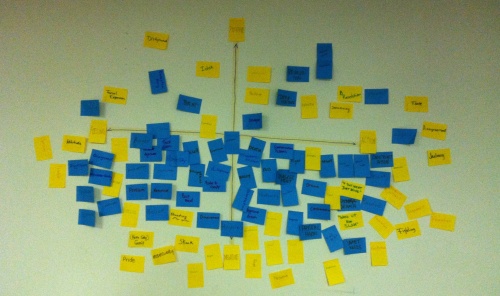 A trend that emerged (which is not uncommon) is that most people view conflict as something negative and something that should be avoided or prevented at all costs.  A few people did, however, recognize some of the positive elements that can emerge from conflict and a couple of the participants were asked to elaborate on those ideas.

Tarek debriefed the exercise by asking people to discuss, in their groups the following questions: Can we eliminate or avoid conflict? Is there any place or relationship free of conflict?  Even when you are by yourself, are you free of conflict? The bad news is that conflict is inevitable. It is a natural part of life.

He then asked participants to reflect upon a time when they experienced intense personal growth or growth in a relationship with someone else as a result of a conflict.  Reflect upon times in our nation’s history that experienced social transformation (e.g civil rights movement, labor movement, women’s suffrage, etc.) as a result of conflict.  The good news about conflict – very little growth and change takes place without it.  No constructive personal or social change has been achieved without great struggle.

He ended with the metaphor that conflict is like fire.  At first we may fear it and see it as something bad and destructive, but if we learn how to manage it and use to our advantage we realize that fire can heat our homes, cook our food, provide light in dark places, protect us from danger, etc.  Conflict is similar.  If we understand it and learn how to manage it, we can turn it into something positive and useful, not something that should be feared or prevented.

We broke the participants up into two equal sized groups and told them that they were going to be participating in an activity that requires them to stand face to face with someone in the other group with a line separating them.  Their goal was to get the other person to cross over to their side of the line.  Each group was given a couple minutes to think about how they were going to achieve this goal.  When we brought the two groups together, lined them up to face to face and asked them to begin, it was very interesting to see what people did to accomplish the task.  Some people started bribing the other person, offering them money to step over the line.  Other people tried to force the other person across the line by physically pulling them.  Only a couple participants realized that they both wanted the same thing and that a win-win solution just required that they both step over onto the other person’s side.  We debriefed the exercise by asking the following questions:

After discussing how a conflict in real life, as opposed to a structured “battle lines” game, is infused with emotion, we talked about the importance of understanding and acknowledging emotions that people in conflict may be harboring.

I spoke about and modeled how crew leaders, educators and teachers can utilize quick, non-verbal “check-ins” at the beginning of the day to gauge how students are feeling.  As you pick them up in the morning or as they enter the room you can invite students to give you either a handshake, a pound/fist bump, or a head nod as a way to communicate their mood.  A handshake means I am alert, energized, ready to work.  A pound/fist bump means I am doing alright but am a little tired or have some other things on my mind.  A head nod means that I am not in a good mood and am very distracted with something else.

These quick non-verbal ways of communicating moods can give educators some information on what they can expect from certain students on any given day and can help them find appropriate ways to approach students if they seem distant or distracted.  It is also a non-verbal way for teachers to communicate that they do care and that they are willing to acknowledge emotions and feelings that students are bringing into the learning space.

We then broke the participants up into groups of 8 and asked them to form circles and practice circle processes of communication.  Each circle was given a different kind of scenarios that might come up during the summer that could be discussed in a circle process exercise.

We broke the participants up into two equal sized groups.  We arranged the groups into a fishbowl style set up.  5 people were invited to enter the fishbowl. All of whom were given one of five listening styles to model.

One person is then asked to enter the fishbowl and asked to share a story about something they did last summer.  The five listeners then model their respective styles. Once the person has finished his/her story the rest of the group, having observed the different listening styles, is then asked to vote the worst listener out of the fish bowl.  After they make their selection they are asked why they thought that person was the least effective listener.  Another participant is invited in to share a story to the remaining four listener.  This process continues until there is only one listener remaining.

We de-briefed the exercise by asking them what kinds of behaviors can one practice to be an effective listener?  What kind of listening habits do they think they have?  Do they see these listening style reflected in any of their friends, family members, and colleagues?  How do different listening style impact how one feels, particularly when they are sharing emotional stories?

This exercise began with the the grouping game.  Participants roam around the learning space randomly.  The facilitator yells out a number and everyone scrambles to huddle up with a group that equals that number.  Everyone who is unable to find a group is eliminated.  After winners emerges, the facilitator calls everyone back into the game to play one last number.  The last number is the size of group you want to use for the next activity.

People were then arranged into different theater groups (6 people per group). Each group had a veteran crew leader from the previous summer.  They were then responsible for choosing a specific moment of conflict that occurred on the job.

Each group was given 15 minutes to devise a rough script and a skit that demonstrates an escalation of an actual conflict that occurred during last year’s program. Each member of the group was asked to play a specific role, while one of the group member (ideally the person who actually experienced the conflict) acts as the director, helping people get into character and play out the scene correctly.

The groups then performed their scenes in front of the rest of the group.  As the rest of the participants watched the scene they were asked to note any actions or behaviors of the actors that they feel represent a “conflict escalator” something that increased the likelihood that the conflict would end negatively or violently.

Members of the audience were then invited to switch places with someone in the scene and replay it, but this time try a different strategy or approach to deescalate the conflict.

We concluded the workshop by having everyone write on a piece of paper: One new perspective they’ve gained on conflict, two news skills or exercises they can utilize this summer with their crew, and three things things of which they’ll be more self-aware in order to better address conflict.

The final activity was the rainstorm exercise, when the entire group made different sounds with their hands and feet (rubbing, snapping, clapping, and stomping of feet) to simulate the sound of a rainstorm escalating and deescalating.