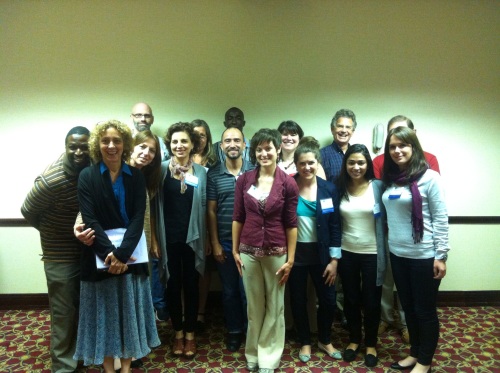 This past Thursday, June 13th, I facilitated a one-day workshop titled, “People Power and Pedagogy: Methods for Teaching Nonviolent Struggle.” There were about 19 participants in the workshop who were all attending pre-conference trainings 7th annual Conflict Resolution Education Conference. This made it one of the most well-attended trainings of the conference. The feedback and comments on the workshop were also very nice to read. Here are a couple quotes from the evaluations:

Excellent mix of academic theory and activities. Well prepared, but also flexible. Remained engaged with the group and kept us engaged during this long session. Thank you!

It was a great experience working with these 19 participants, all of whom are educators of one sort or another, working for a school, college or university, or an educational organization. So the debrief and conversations that emerged from the various exercises were very educational for me as well and got me thinking in new ways about how to unpack issues around the teaching of civil resistance.

Here were some of my biggest takeaways:

First, I engaged the participants in a tactical analysis exercises where two different groups looked at a series of actions that people can take in a conflict or struggle and arranged them on a spectrum from most violent to most nonviolent. A lot of robust discussion immediately emerges in each of the groups in that making decisions using the spectrum on a lot of other variables – even though, initially participants think its going to be a relatively easy and straightforward exercise.

Anyway, as we were debriefing the exercise, I asked the participants, “what else would you want or need to know in order to make a more informed decision in this process – as an individual and/or as a group? One of the participants said something in response to this that I had not heard at all in all the other times I have done this activity with groups.  She said, “I would want to know what the group/movement has tried already.”

She brought in this concept of when a tactics or method is used given where it falls in sequence to the other tactics that have been used. In other words, setting one’s self on fire might be considered extremely violent if it the first tactic that an individual decides to use in response to some form of injustice. But, if several other tactics had already been used and produced no result, and THEN the decision to set one’s self on fire was made, then it might not be considered violent at all but quite nonviolent. I found this to be a fascinating insight.

The second big takeaway I got from this group was a conversation that emerged around ideas of privilege. One of the professors in the group teaches a class on diversity, multiculturalism and race and shared with us a very interesting assignment she gives to her students for them to be exposed to an example of privilege. She asks her students to go and try to find a birthday card for a one year old black child or any non-white child for that matter. When the students return the next week they talk about what the experience was like and whether or not they were able to find one. We then expanded on this and thought about what it would be like to find a wedding anniversary card for a same-sex couple or a mixed race couple.

Sure, there are cards that are race neutral and so forth (those are the ones that I buy, considering I come from a mixed race family and am now the father and husband in a mixed race family), but the cards that do have pictures of individuals on them are most of the time white. And if they are not white, then then they are usually black and in a special section in the card aisle for black people.

Lastly, one thing that I will certainly not forget – and this goes back to what I said at the start of this post about learning a lot from the participants – is a comment that one of the participants in the workshop shared at the end of the session. He said that he appreciated that I was actively taking notes (as the presenter/facilitator) throughout the workshop. This was the first time he had seen a presenter/facilitator taking notes and writing down things that he/she was learning from the group. He said that made him feel respected and part of a learning community instead of just a passive learner with nothing of value to share.