This past Thursday, my friend and colleague, Althea, and I facilitated a presentation on nonviolence for a group 100 6-12 graders at the New School of Virginia. My friends and former colleague, Travis Cooper, invited us to give this workshops as part of a learning unit he was doing with his students looking at civic activism.

This was a great opportunity for Althea and I to mix concepts from various orientations and conceptions of nonviolence – the ICNC strategic nonviolent action orientation and the Kingian nonviolence orientation.

One interesting comment I heard before we began our presentation was one student saying, “What is this? Is this going to be some kind of college lecture or something?” And, you could tell from his tone that he was not looking forward to the 2 hour experience that was about the begin. Little did he know that we had an experience quite different than just two hours of lecture. Below is the basic outline and description of what we did.

Mini Intros (5 minutes – Althea and Daryn)
Guessing game – Althea and I each provide 3 interesting facts about ourselves and then the audience has to guess which one of us goes with the fact and which one is something we aspire to do or be. It is like two truth and a lie, but two truths and an aspiration instead. (e.g. plays on a soccer team, vegan, lived abroad in Cambodia, ran a marathon, etc.) Students show who they vote for by a round of applause or feet stomping. This is a good way to get them warmed up and get to know a bit about us.

Pre-Framing (5 minutes – Althea)
Pre-framing Q&A to get the students excited about the presentation and gauge their level of understanding and knowledge around nonviolence.

We are here to talk about the phenomenon of nonviolent civil resistance, nonviolent struggle, and how ordinary people can and have used nonviolence to create positive social change.

What is Nonviolent Struggle? Definition of Nonviolent Struggle (5 minutes – Althea)
Who/What? Nonviolent struggle is a way for courageous people to fight for human rights and justice using nonviolence. It is a way of addressing problems and conflicts that we see in our schools, our communities, our society without engaging in violence or harming people.

Nonviolent Methods Slide Show (15 minutes – Daryn & Althea)
Short visual slide show (w/ music) of different methods of nonviolent action that movements around the world have used throughout history. The intent is to expose students to nonviolent action beyond protests and marches and beyond Gandhi and King.

Daryn leads on setting up the slide show and invites students to wave their hands in the air when they see and image that resonates with them or they find inspiring. He also tells the history of the song that is playing during the slide show.

Althea leads on addressing questions students have about specific images that were in the slide show.

“Cross the Line” Violent vs. Nonviolent Tactics and Scenarios (30 minutes – Daryn)
Short exercise exploring student conceptions of what constitutes a violent or nonviolent act when fighting against injustice. We provide a fictional scenario of injustice for them to work with. The intent is for students to start forming a sense of how they would make decisions to fight back without using violence. It is also designed to get students thinking about how different forms of oppressions and injustice may generate a different logic behind deciding whether or not an act is violent or nonviolent, strategic or nonstrategic.

Possible actions to fight against this injustice:

Have somebody read the principle out loud & tell the group what they think it means followed up expanded explanation. 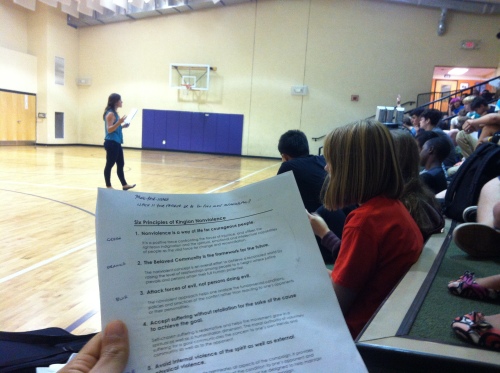 Principle 1: Nonviolence is a way of life for courageous people

Principle 2: The Beloved Community is the Framework for the Future

Principle 4: Accept suffering, without retaliation, for the sake of the cause, to achieve the goal

Principle 5: Avoid internal violence of the spirit as well as external physical violence

Principle 6: The Universe is on the side of justice

Get the students into 6 groups, each group is given one of the principles and asked to create a human sculpture that depicts that principles.Each group is then called to the front of the room to pose in and show their sculpture while the rest of the students move around to observe and notice the 3-dimensional sculpture, guessing which of the 6 principles that sculpture is trying to depict.

Debrief with discussion on how these principles can be applied at the micro (personal) level and macro (movement/international) level. Daryn and Althea provide context and stories about how each of the principles play out in our day-to-day lives

Each of the 6 sculpture groups decides on one thing, one action, that everybody in that group can commit to doing in the coming week to incorporate nonviolence into their lives.