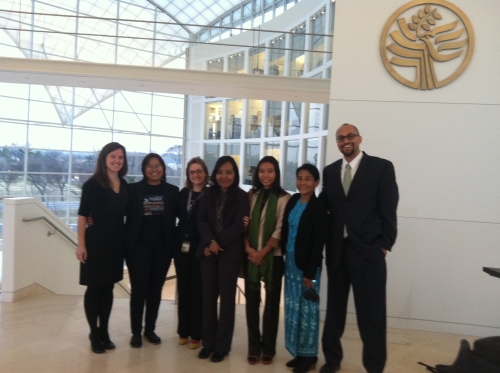 This past Tuesday my colleague, Althea Middleton-Detzner and I got the opportunity and privilege to give a presentation and have a discussion on civil resistance with a group of amazing Burmese civil society and political leaders.  The four women in the delegation were Khin Lay, Shunn Lei Swe Yee, Ma Nilar OO, and Zin Mar Aung, who was a recipient the 2012 International Women of Courage Award.  The United States Institute of Peace invited us to give the talk, which was part of a series of meetings with the delegation that focused on rule of law, governance and, of course, nonviolent political action (aka civil resistance).

Our presentation and the conversation was structured around four main ideas of civil resistance – conflict, power, obedience, and strategy. We looked at Dr. Martin Luther King’s, “Letter from a Birmingham Jail” and his explanation of what nonviolent direct action is and why its important for social change. We looked at Gene Sharp’s monolithic and pluralistic views of power and how that reveals the importance of obedience and behavior patters in a society. We then briefly touched the unity, planning, and nonviolent discipline – three elements present in all successful nonviolent movements.

The four women were able to provide us with some interesting perspectives on the Burmese nonviolent struggle that, for many years, had been led and promoted by Aung San Suu Kyi (who had spent 15 years under house arrest). A couple interesting take aways for me in our conversation with these amazing activists, is that: (1) nonviolent campaigns/demonstrations that did not lead to an immediate success tend to cast the entire approach of nonviolent action as unsuccessful, when in reality, just because one phase of a struggle does not yield the desired result, does not mean that the method of struggle is a failure. (2) Burma is undergoing a number of fundamental political changes, the most significant being that they are no longer ruled by a military junta but now actually have a civilian government. That being said, Burmese (and the international community to a certain extent) are cautiously optimistic about these changes.

Kathleen Parker of the Washington Post wrote a great article about these four women and their trip throughout the United States. Here is a short excerpt:

“The accomplishments of the four Burmese women also include helping political prisoners, providing education and training to underserved girls and young women vulnerable to trafficking, and advocating for victims of domestic violence. The name of one of the organizations they help suggests the urgency and breadth of their challenges: Stop Sexual Harassment on the Bus Now.”

One response to “Civil Resistance Talk with Burmese Delegation”